Settled In: Celts camped here as early as 400BC; first permanent fortifications 1000 AD
Officially Founded: 1050 AD, Free Imperial City in 1219 AD, joined Bavaria in 1806
Language: German, but basic English gets you by.
Suggested Stay: 2 Full Days with an overnight stay

The city of Bamberg was built across seven hills with the center of Old Town high up on Castle Hill (Domberg) which was settled as early as 600AD.  The center was the Babenberg Castle (Castrum) was built in the 800s on today’s Cathedral Hill.  In 996 Heinrich II became the Duke of Bavaria on his way to being both the King of Germany and Holy Roman Empire and established his royal court in Bamberg.

With establishing the Bamberg Cathedral and Diocese of Bamberg (Archbishop), the city grew so powerful that even Pope Benedict VIII made a rare visit outside of Italy to attend court in Bamberg.  Pope Clement II even loved Bamberg so much that he was buried in the Cathedral in 1047 and is the only Papal tomb North of the Alps.  King Conrad III (House Hohenstaufen) who ruled from nearby Rothenburg was also buried in Bamberg in 1152 where he passed the crown to his nephew Frederick Barbarossa who would extend Hohenstaufen rule as Holy Roman Empire.

As other cities like Nuremberg slowly surpassed Bamberg over the centuries, in Medieval times the city got caught up in The 30 Years War and witch trials.  Luckily most of the architecture and charm of the Little Venice of the North was preserved through the turmoil.  Today, a visit to Bamberg will lead you over the canals, along Medieval lanes, to royal palaces, into a unique beer culture, and through one of the best Cathedrals in Europe. 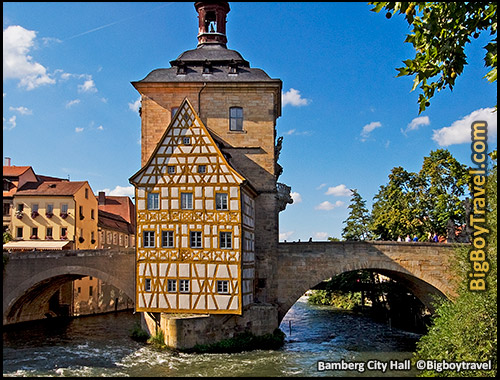